Articles/Al-Auja Palace: A home fit for a king

Al-Auja Palace: A home fit for a king

Al-Auja Palace is a majestic Saudi royal palace established by Custodian of the Two Holy Mosques King Salman to become the official residence of the Royal Family and host meetings with state leaders. It is located in Riyadh’s Diriyah area overlooking the bank of Wadi Hanifa and lies adjacent to the Turaif district on its west bank and the Bujairi district on the east. Important decisions are issued by King Salman at this palace. 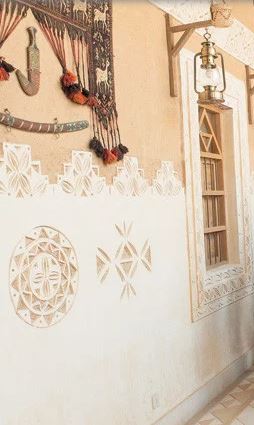 The historical palace of Al-Dir'iyya was called Al-Auja, whose name has been associated with the First Saudi State. Al-Auja means “crooked” in Arabic and the name was given to this area after the uneven curves of both sides of Wadi Hanifa. Al-Auja is also mentioned in many Saudi poems, including a famous poem by King Fahd in which he said, “We’re Al-Auja people”. The word "Al-Auja" has also been used to describe the Royal Family.

The famous palace was built using traditional Najdi architectural methods. The walls carry more than 50 historical photographs of the old Riyadh city and the Kingdom’s founder King Abdulaziz as well as weapons that were used in the early unification of Saudi Arabia such as guns and swords. Its ceilings and floors are also designed in a traditional style and the walls decorated with old clay and bright white plastering, as was used in the past. The palace’s doors feature the same wooden inscriptions used in the historical architecture of the Najd region.