There are many legends about the Arabian Peninsula, but some have been proven to be reality with the discovery of monuments and stones dating back thousands of years.

One of the greatest and most ancient of these discoveries have demonstrated the widespread domestication of animals, particularly horses. Al-Magar, which lies between Tathleeth and Wadi Al-Dawasir province, is full of statues and monuments dating back 9,000 years.

Al-Magar is characterized by its valley, originally a river flowing to form a large waterfall; this indicates that people lived in this region before it became an arid desert. Inhabitants during the Modern Stone Age relied on agriculture and animal domestication, as demonstrated by the discovery of various ancient stone tools, including arrows and skimmers.

These tools revealed the ability of humans to domesticate animals for their daily activities. Animal fossils found in the area, including those of horses, goats, ostriches, greyhounds, and falcons, were analyzed and found to be over 9,000 years old. 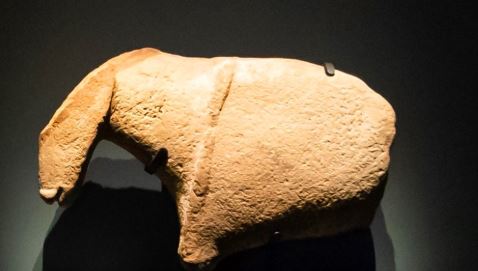 Al-Magar is distinguished by the presence of historical sites that can be attributed to the Middle Stone Ages. Thousands of years ago, Al-Magar inhabitants were one of the first cultures in the world that domesticated horses, demonstrated by huge statues of the animal found in the region. Comparatively, the people of Kazakhstan in Central Asia domesticated horses 5,500 years ago.

Gigantic horse remains have been found in Al-Magar that also bear the characteristics of the original Arabian horses such as neck length and head shape. A statue of a horse's head found in the region was wrapped in a bridle, further proving the domestication of horses in that period. These statues are believed to have been built in a busy hub that may have played a major role in the social life of the inhabitants.

Relics that tell a story

Stone relics arranged in a mountain formation overlooking the lowlands, as well as caves and cemeteries in which mummified human skeletons were found, tell stories about the lives of people thousands of years ago.

In addition, the discovery of ancient stone tools demonstrate the prevalence of very advanced craftsmanship such as grain grinding and leather processing. An Arabic dagger made from stone was also discovered – evidence that Arab civilizations existed for many millennia. Inscribed rock paintings tell the story of a horse rider going hunting. Other rock paintings of horses and human figures were found on stone slabs among the ruins of a main settlement building discovered in the center of the region.