Jeddah is home to many impressive historical mosques, most notably Al-Shafi’i Mosque. Also known as Al-Atiq Mosque, it is the oldest mosque in the Red Sea coastal city and dates back to the reign of Caliph Omar bin Al-Khattab.

The building is located in the Mazloum District, considered one of the main historical sites in Jeddah. Al-Shafi’i Mosque was named after Imam Muhammad ibn Idris Al-Shafi'i, one of the four imams of Islam who was born in 767. 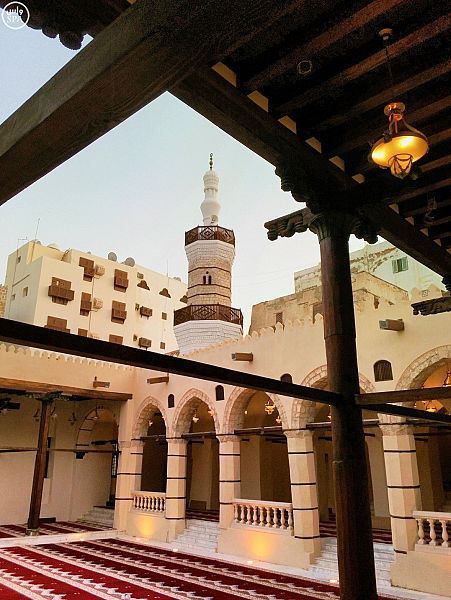 Sea mud, brick, stone and wood were used to build the mosque – these materials were also typically used to construct Jeddah’s traditional houses. The building’s unique construction is characterized by its rectangular shape, open yard and four marble columns topped with pointed arches that stand parallel to its Qibla (prayer direction) wall.

Since it is a prominent heritage site, the late King Abdullah ordered the mosque to be renovated – this in turn uncovered a number of historically-significant artifacts. The mosque was restored with key features left intact, such as the 900-year-old minaret as well as the old piping system that covers 1,700 square meters. King Salman bin Abdulaziz visited the mosque in 2014 and ordered further restoration work.

Because it is situated in the UNESCO-listed historical Jeddah area, Al-Shafi’i Mosque is a key component of a World Heritage Site. The mosque is indeed an enduring heritage building surrounded by many popular souks that have retained their traditional character.