Jeddah is characterized by many key attractions such as its historical district, Red Sea coast and excellent shopping centers. However, if you take the time to drive around, you will also notice the beautifully designed sculptures and roundabouts that almost transform the city into an open museum. These wonderful pieces of art were designed by international artists and installed on the orders of former mayor Mohamed Said Farsi, who wanted his beloved Jeddah to look like the embodiment of a cultural masterpiece. 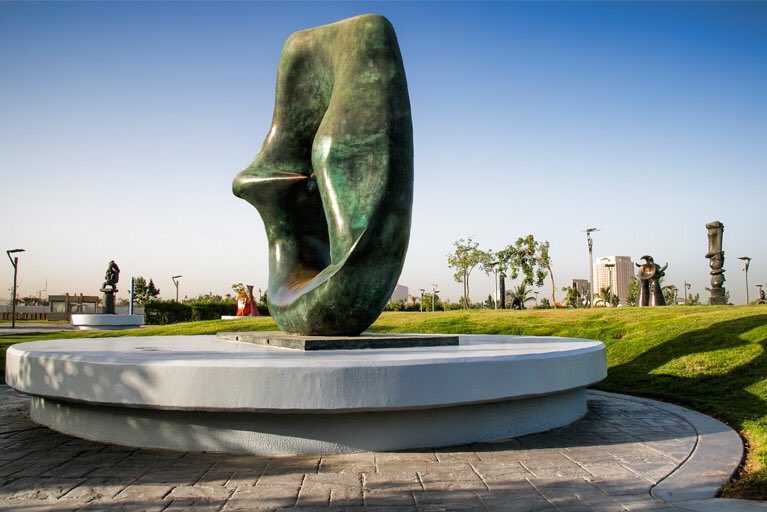 You can visit the open museum "Jeddah Sculpture Museum" on Corniche and not very far from the famous King Fahad’s Fountain. Wafy introduces you to other famous sculptures and roundabouts in the city, their history and locations. 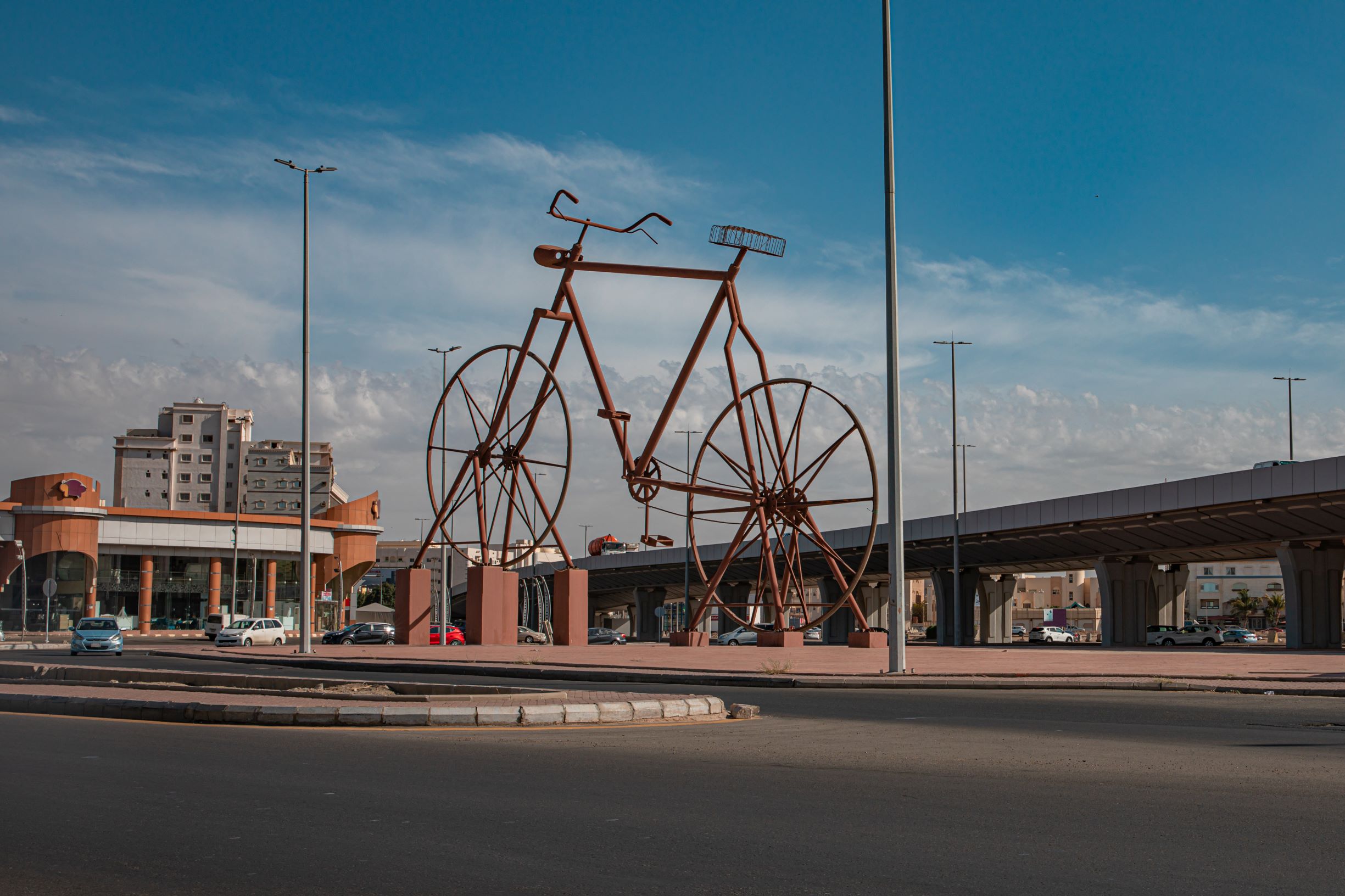 This is one of the most famous roundabouts in Jeddah and entered the Guinness Book of Records for featuring the largest bicycle in the world. It was designed by international Spanish artist Julio Lafuente more than 30 years ago and is an iron artwork created from the remains of the first Saudi marble factory. It is located in Al-Faisaliah district but was transferred to another location due to the construction of a new bridge and removal of the entire roundabout. 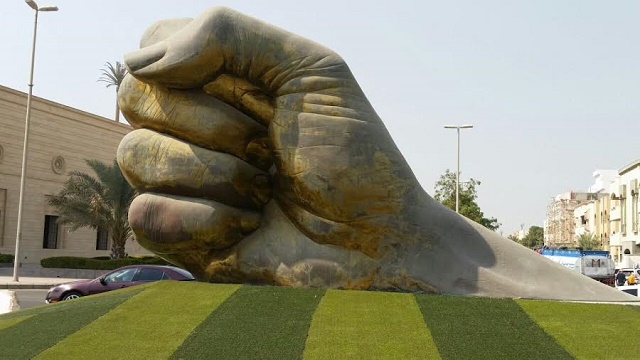 French artist Cesar Baldacchini designed this steel sculpture in the late 1970s. It was gifted to Jeddah by the late Minister of Defense and Aviation Prince Sultan bin Abdulaziz and is one of the most prominent landmarks in the city. It is located on Prince Sultan Street between Al-Salamah and Al-Zahra districts. 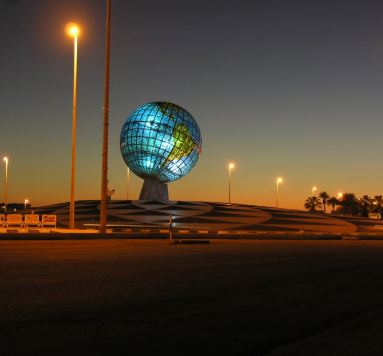 In the mid-1970s, Julio Lafuente worked on a sculpture of the globe in Italy that was made from stained glass in a large circular shape and is characterized by its gigantic dimensions. The idea of this artwork was to portray Makkah as the light and center of the Islamic world. It is located north of King Abdulaziz Road near Al-Murjan district and the Palace of King Abdullah bin Abdulaziz. 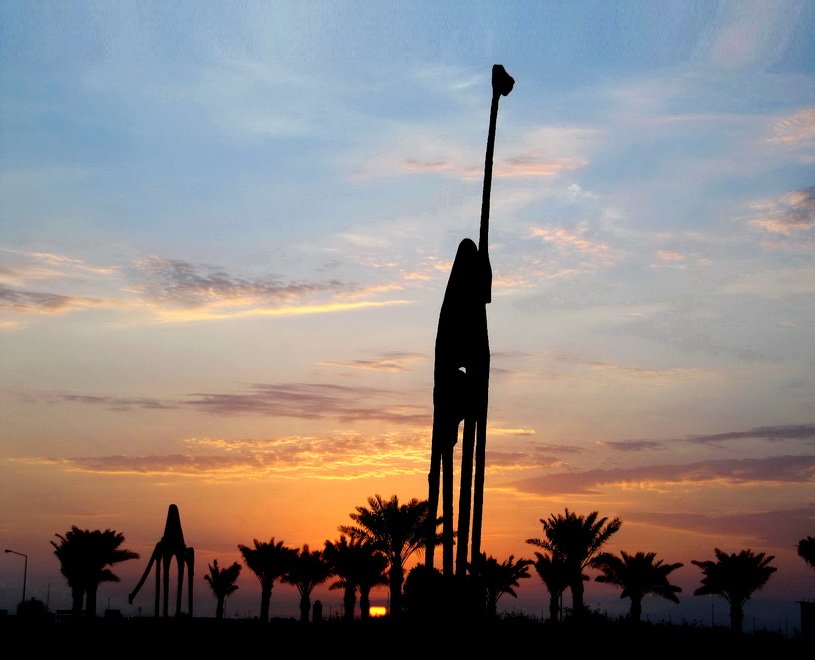 One of the most beautiful squares in Jeddah, this roundabout is located in North Obhur and designed by the sculptor Rabi Al-Akhras. He has been praised for capturing the gracefulness of the camel with its long legs and neck. The artwork is placed on a high concrete foundation. The original name of this sculpture is unknown, but it became known as the Camel Roundabout. 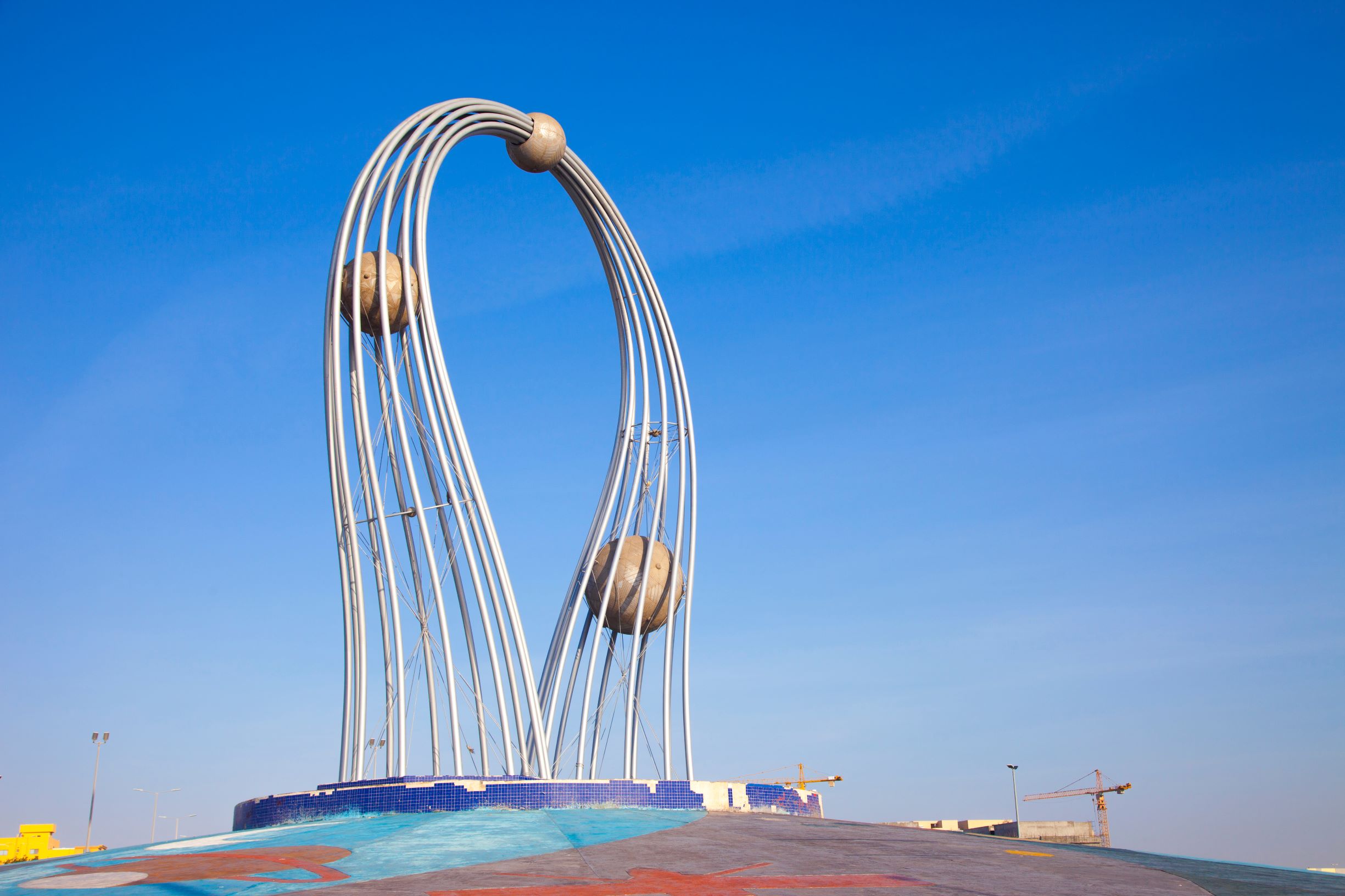 This sculpture was created by German artist Ottmar Holman and is located at the intersection of Sari Street with King Fahd Road. It took him seven years to complete it in Germany and was shipped as separate parts before being assembled in Jeddah. Its base was created in Italy and shipped to Jeddah; assembly and installation was carried out by an Italian craftsman for over two months.

The steel tubes of the sculpture represent the galaxy and orbital path, while the three balls represent the planets. The mound base depicts the solar system in the form of a stunningly colorful 2 million piece mosaic, and the blue and white Arabic script inscribed on the base of the monument is a verse from the Holy Qur'an about astronomy, phases of the moon and the solar system. 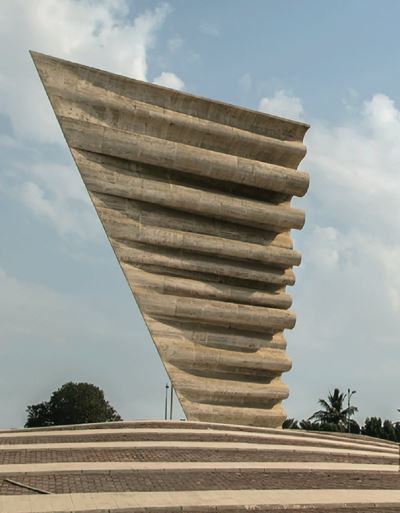 In the mid-1970s, Julio Lafuente worked on his Al-Qiblah sculpture that points towards Makkah. It is located at the beginning of King Abdulaziz Road and at the end of Al-Andalus street. 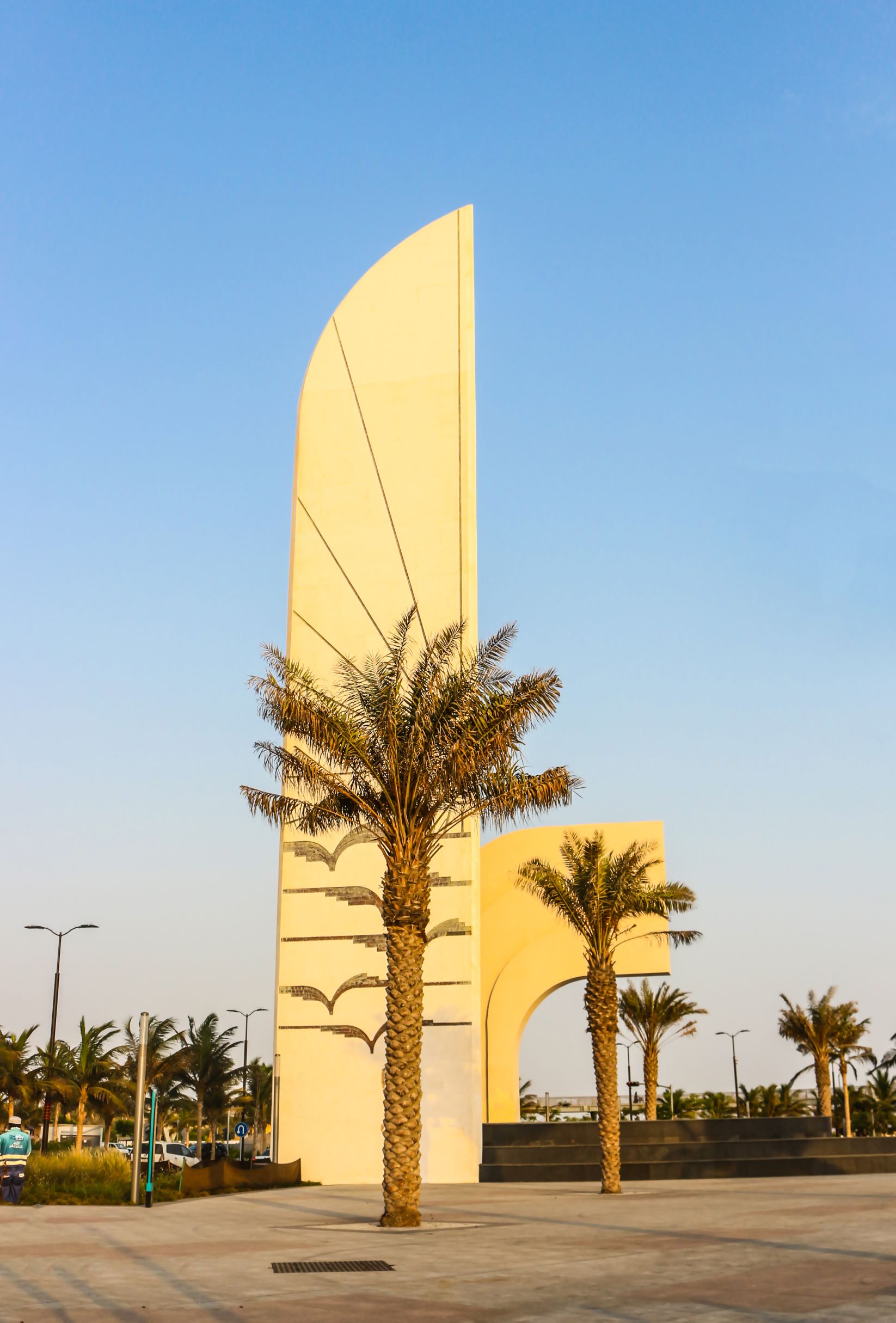 One of the world’s largest abstract sculptures and located in the Jeddah Corniche, it was created by Egyptian artist Mustafa Sonbul and made from reinforced concrete. Standing 55 meters tall, this magnificent piece of art took three years to build and was presented as a gift to Jeddah by the Ministry of Post, Telegraph and Telephone. It resembles the wing of seagull diving into the sea to catch its prey. 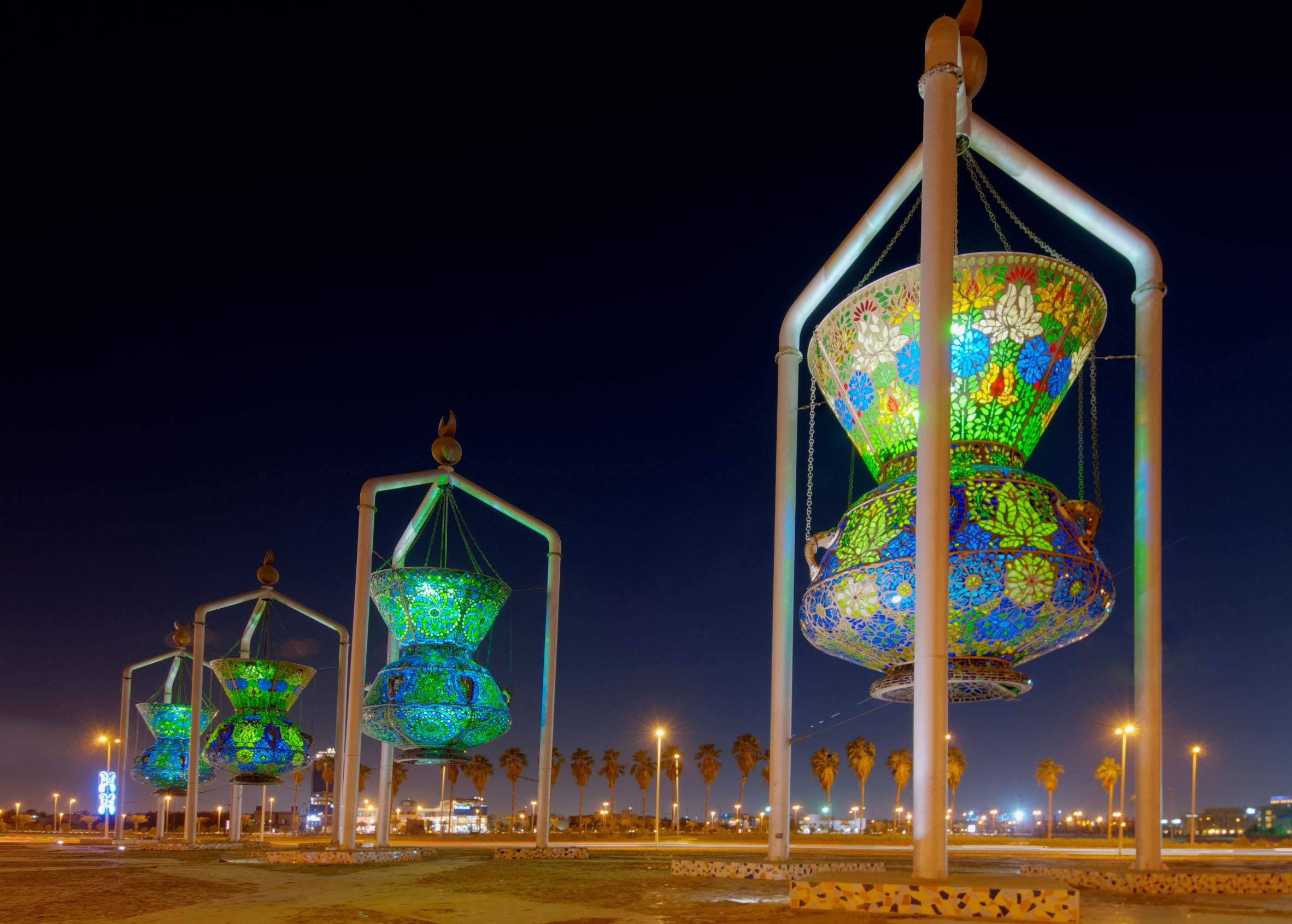 Also known as the Mamluk Mosque Lamps, this piece of art is located on King Abdulaziz Road near Tahlia Street. It was designed by Julio Lafuente in the mid-1970s and designed to reflect the lanterns of mosques in Cairo during the Mamluk era in the mid-14th century. All of the lamps are lit at night.

This sculpture was designed in the mid-1970s by Julio Lafuente, who was inspired by a carving of Arabic calligraphy as depicted in Hassan Masoudi’s book “Calligraphie Arabe Vivante”. It was created from 20 tons of bronze and located on Prince Sultan Street near Royal Hall Bridge.