Exploring the rock art and forts of Al-Arfa'a Mountain

Petroglyphs can be found in abundance throughout Taif, and they are particularly concentrated in and around the Al-Arfa'a Mountain.

Located 35 kilometers northeast of Taif, this mountain is one of the largest sites for rock art and inscriptions, attracting tourists with a keen interest in Arabian history. 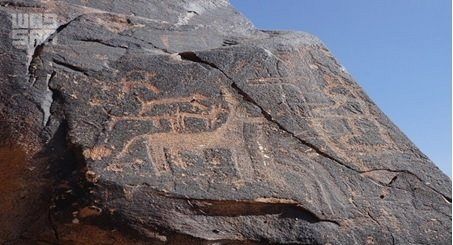 Visitors can see petroglyphs of many animals such as goats, deer, and cows that date back to before the second millennium BC. Thamudic inscriptions and Kufic writings that describe the daily life of that era can also be found; humans commonly hunted using crude implements.

Northeast of Taif lies the remains of the historic Al-Arfa'a Castle, built from stone in the late 13th century AH. An ancient castle named after the eponymous mountain, it has also been called Shai’q Castle and the Sharif Castle. It was one of the many fortresses built to protect trading roads and deter aggressive tribes. The castle also carried political and military importance.

The castle contains two watchtowers decorated with quartz stones. It has three floors; the first was built from stone and acted as the cornerstone upon which the castle is based, while the second and third floors were built from clay. Its walls contain many ancient inscriptions and engravings dating back to the Thamudic and Kufic civilizations and which depict the inhabitants’ lifestyle of the time.

Inside the castle are many spacious rooms, storage areas, small prison and prayer room. On the outskirts of the castle is a cylindrical-shaped reconnaissance tower with observation niches to monitor any infringements. There are also a number of wells that provided water for residents throughout the year.