Articles/Holy Ka’bah: A focal point of prayer for millions

Holy Ka’bah: A focal point of prayer for millions

The Ka’bah, also known as Baytullah (House of Allah), is the first house built for humanity to worship Allah. The historical impact of this famous cubed building is unmatched around the world. Mentioned in the Holy Qur’an, Allah has made the Ka’bah a focal point to perform Umrah and Hajj in Makkah. 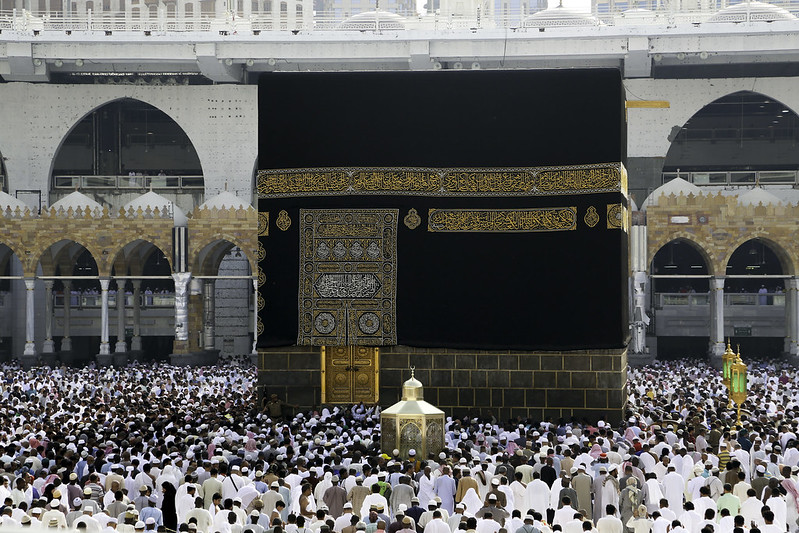 The Ka’bah has been rebuilt and restored on several occasions throughout history. According to Islamic scholars, the Ka’bah was originally constructed by angels and then by the first man and prophet, Adam (peace be upon him). Prophet Ibrahim with the help of his son Ismail (peace be upon them) were the next to rebuild this holy structure before the Quraysh tribe carried out extensive work during the pre-Islamic period. Notable restoration work was carried out by Abdullah bin Zubair in 65 AH – he rebuilt it to be a stronger building that could withstand torrents and floods in line with the wishes of the Prophet (pbuh). 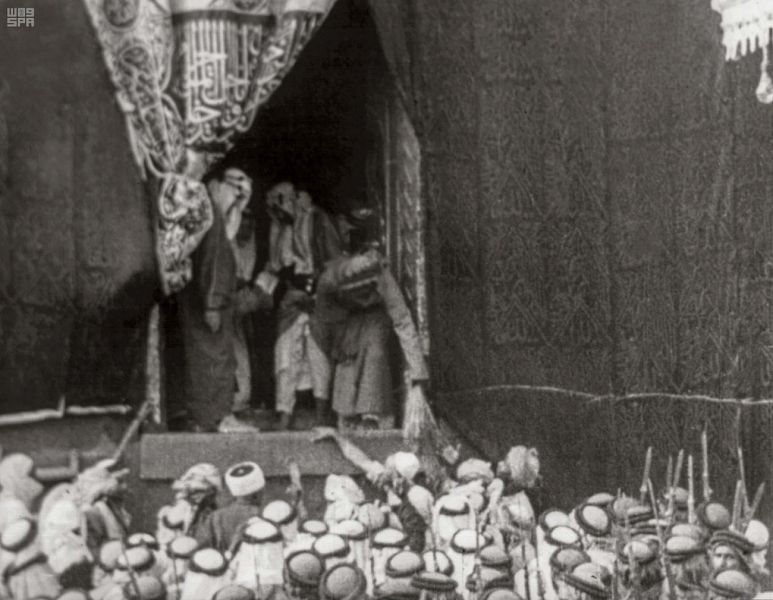 Further refurbishments took place during the Umayyad period, then the era of the Ottoman Empire in 1039 AH, and finally by Saudi Arabia in 1997 when the Ka’bah was completely renewed inside and out. Today the height of the Ka’bah is 15 meters, while its width varies. 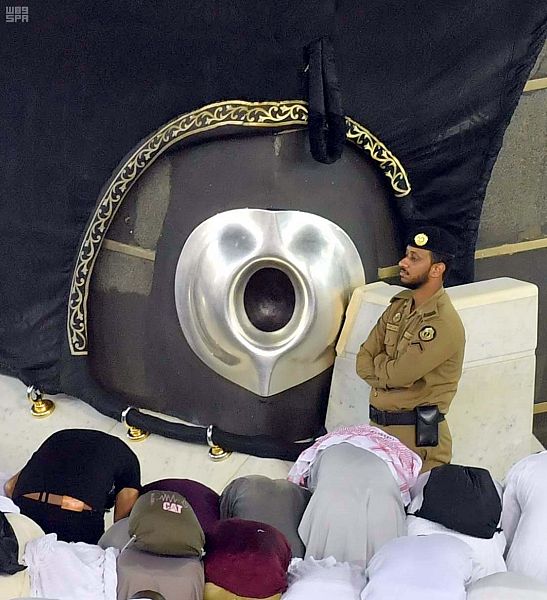 Components of the Ka’bah

• Hajar Al-Aswad: This is the sacred Black Stone of Heaven where tawaf (circumambulation of the Ka’abah) begins and ends. The oval-shaped smooth stone is 1.5 meters above ground level, and is 30 centimeters in diameter. 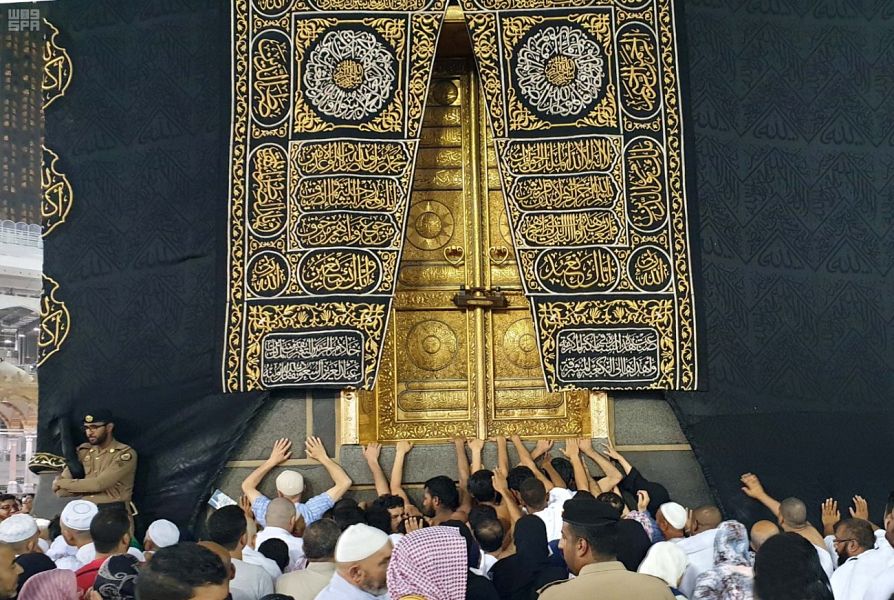 • Multazam: This is the area between the Hajar Al-Aswad and Door of the Ka’bah. It is approximately two meters wide and is where supplications are accepted. 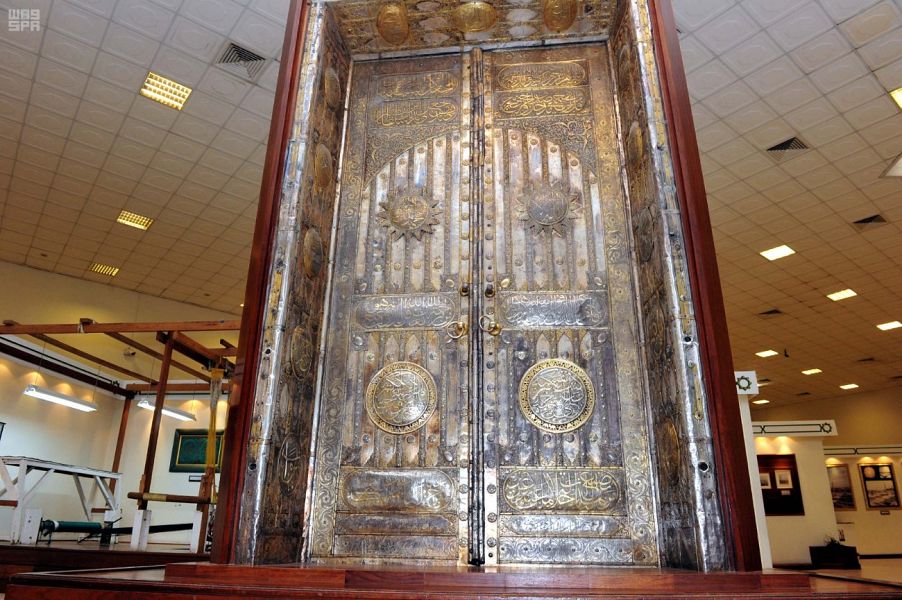 • The Door of the Ka’bah: This is the entrance of the Ka’bah on its eastern side, lined with pure gold and inscribed with Qur’anic verses. It is more than three meters high and less than two meters wide. It is situated above ground level and opens only twice a year. 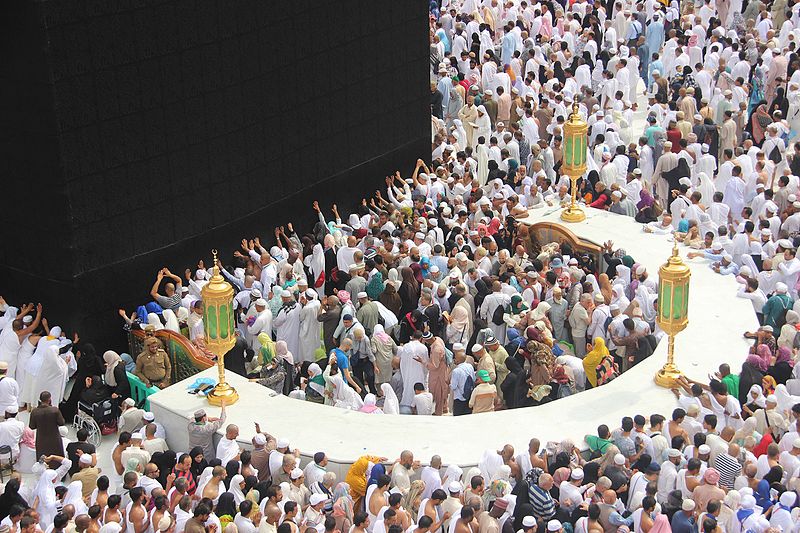 • Hijr Ismail: Also called Hateem, it is the crescent shaped area immediately adjacent to the Ka’bah. 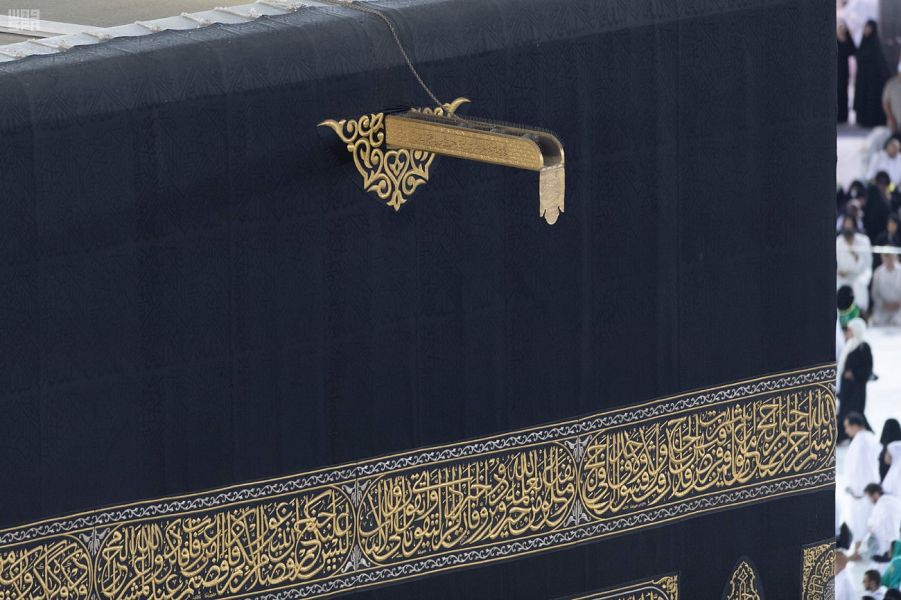 • Meezab: Also called "Meezab Al-Rahmah", this is the golden spout from where rainwater on the roof of the Ka’bah falls onto the Hijr Ismail. 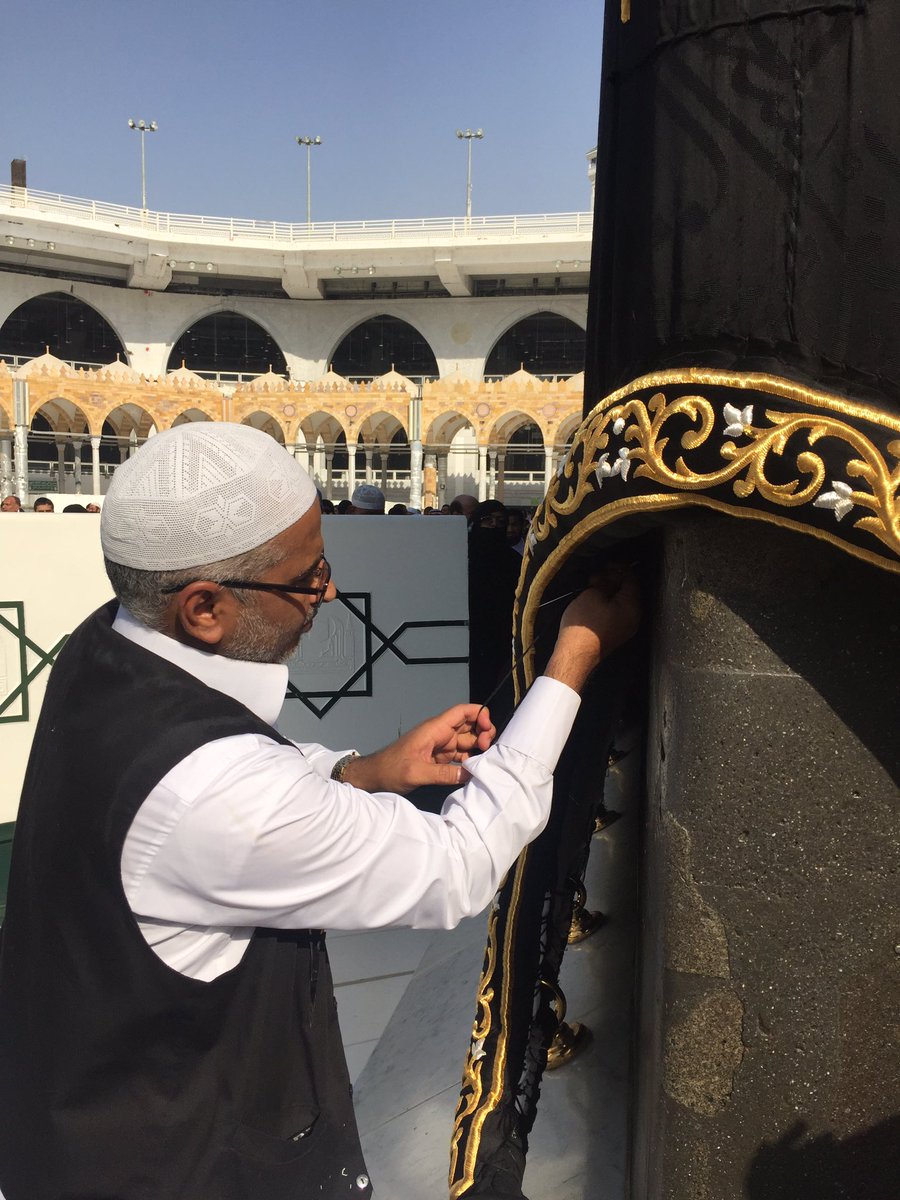 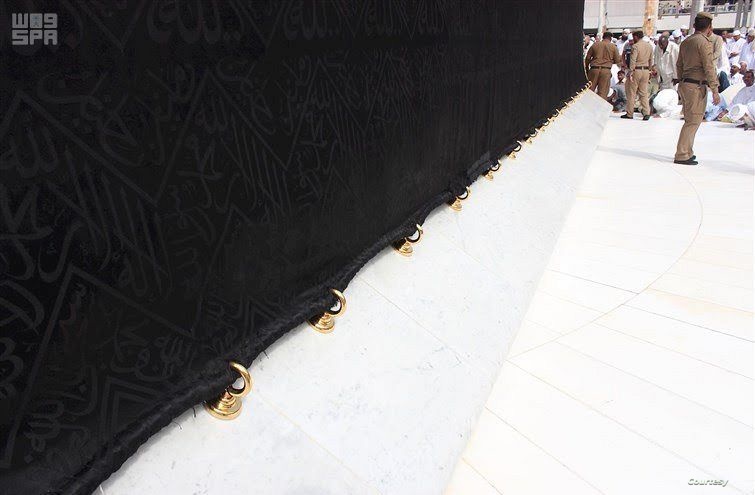 • Al-Shazrawan: This is the white marble surrounding the Ka’aba on three sides. 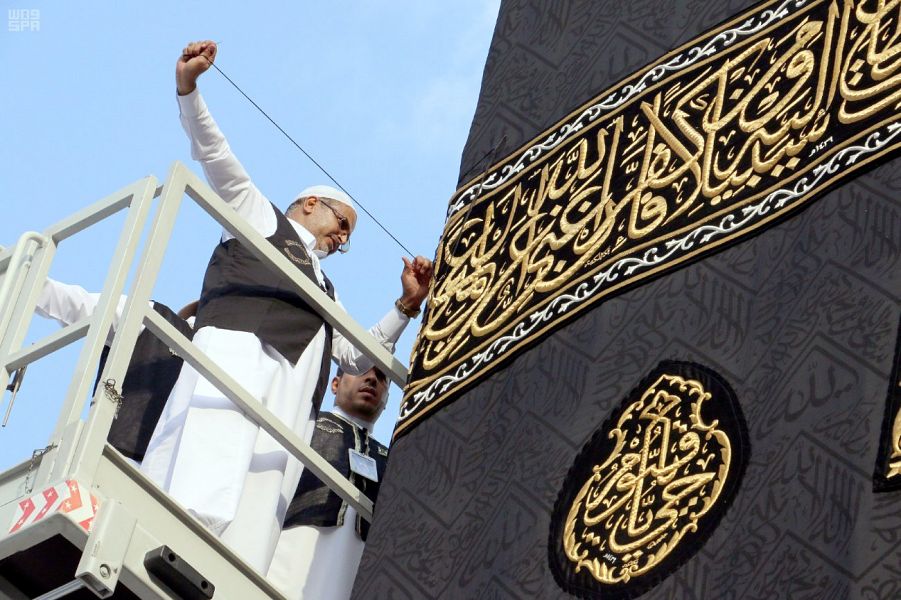 • Kiswah: This is the Ka’bah’s covering that was first placed by the Prophet Ismail (peace be upon him). It is changed once a year. 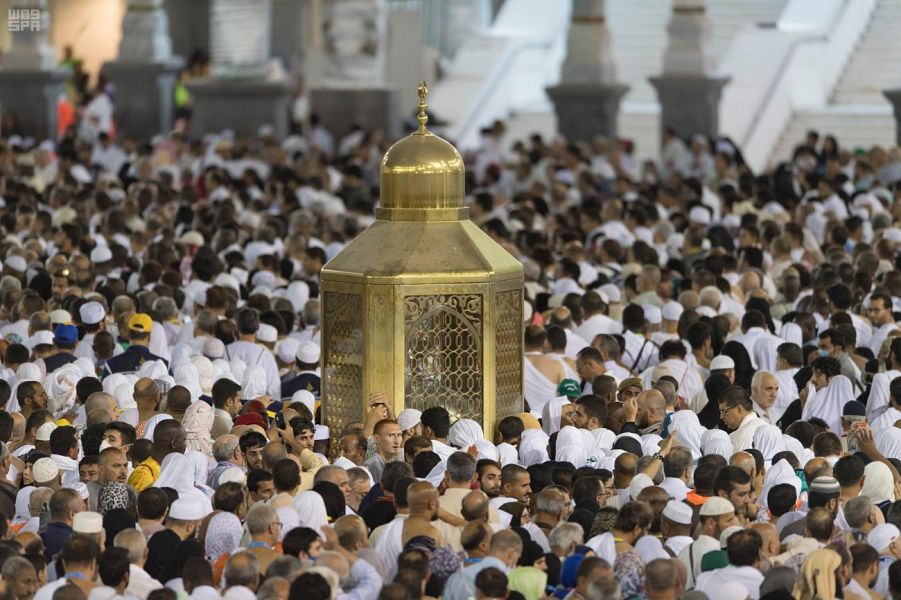 • Maqam Ibraham: These are the stone footprints of Ibrahim (pbuh) that formed while he was building the Ka’bah. 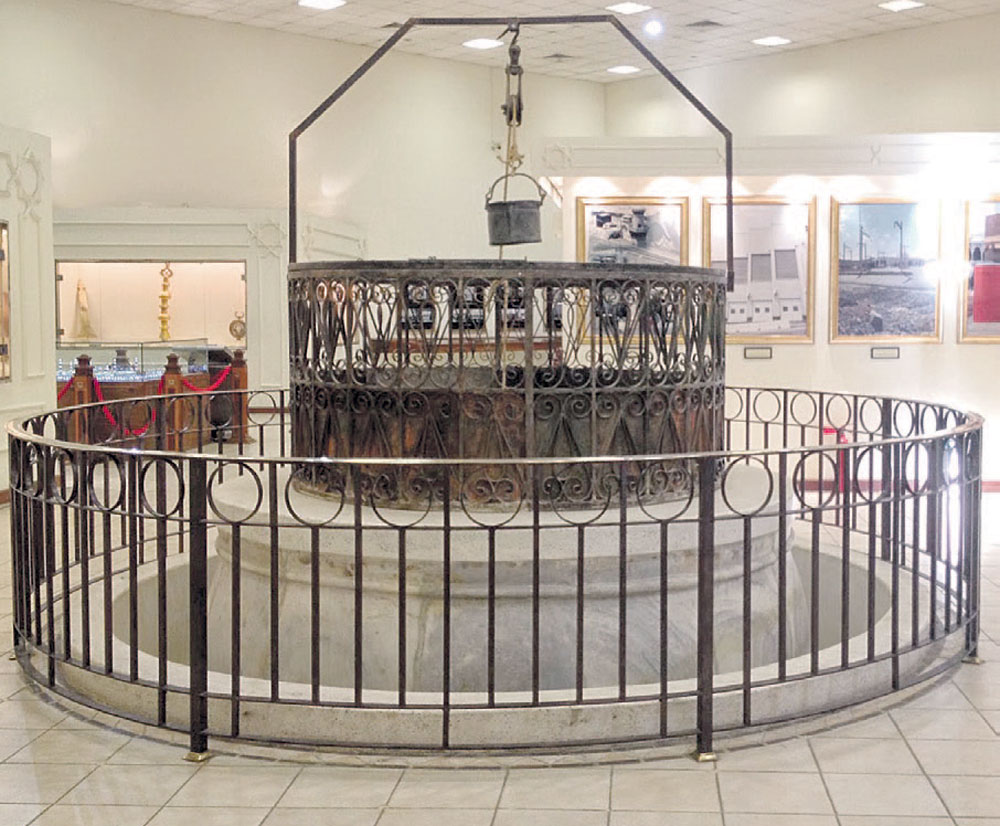 • Zamzam well: This is the blessed well located 18 meters south of Maqam Ibrahim. It is a living miracle because it has provided a continuous water supply for almost 4,000 years. 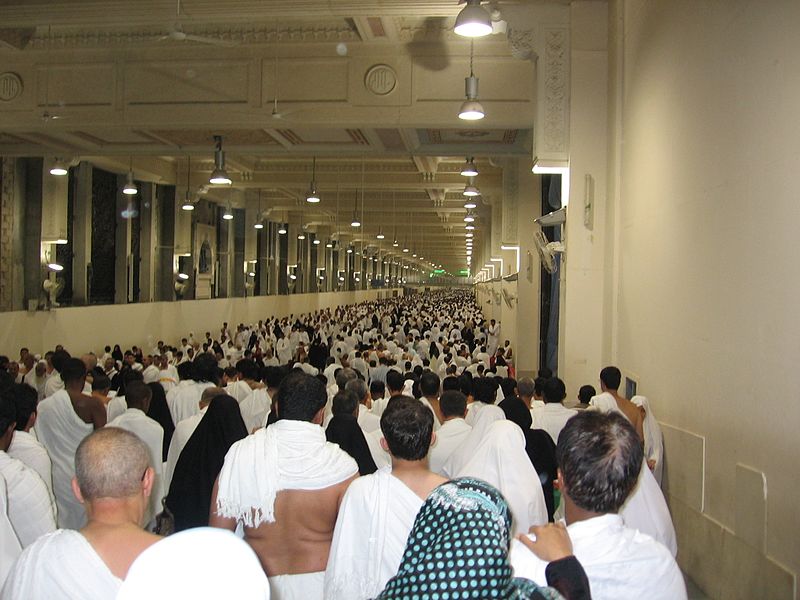 • Al-Safa and Al-Marwah: These are two large rocks inside the Grand Mosque from where pilgrims start the Sa’ee; they run between the two locations seven times and emulate the actions of Ibrahim’s (pbuh) wife Hajar. Al-Safa is part of Jabal Abu Qabis on the southern side, and Al-Marwa is part of Jabal Qaiqan on the northern side. 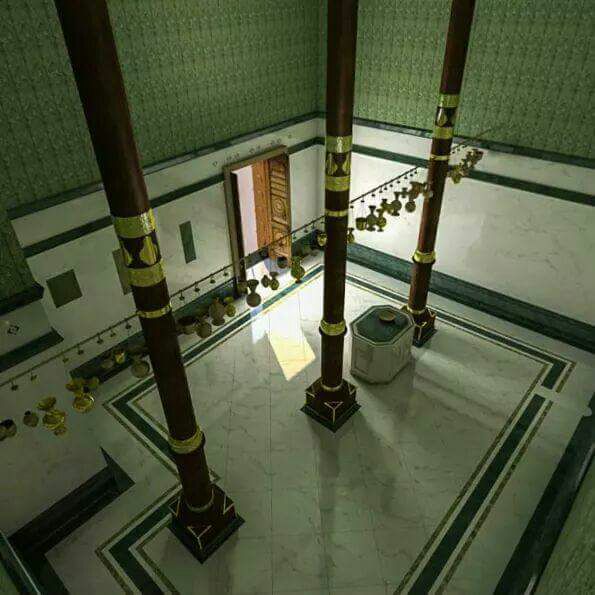 Inside are three skillfully carved wood columns about nine meters high and decorated with golden motifs. The floor is covered with white marble, and there is one dark colored marble slab, the position of the Prophet’s (pbuh) prayer. The walls have green cloths decorated with Qur’anic verses and which also cover the ceiling. There are also a number of suspended copper, silver and glass lamps engraved with Qur'anic verses that date back to the Ottoman period. Today, only a privileged few have had the opportunity to step inside the Ka’bah.