One of the largest mosques in the world, Al-Masjid An-Nabawi, or the Prophet’s Mosque, was established and built by Muhammad (peace be upon him) upon his migration to Madinah. The mosque is the second holiest place in Islam after the Grand Mosque in Makkah. It is a major pilgrimage site and thousands of pilgrims visit the mosque before or after completing the Hajj or Umrah rituals. 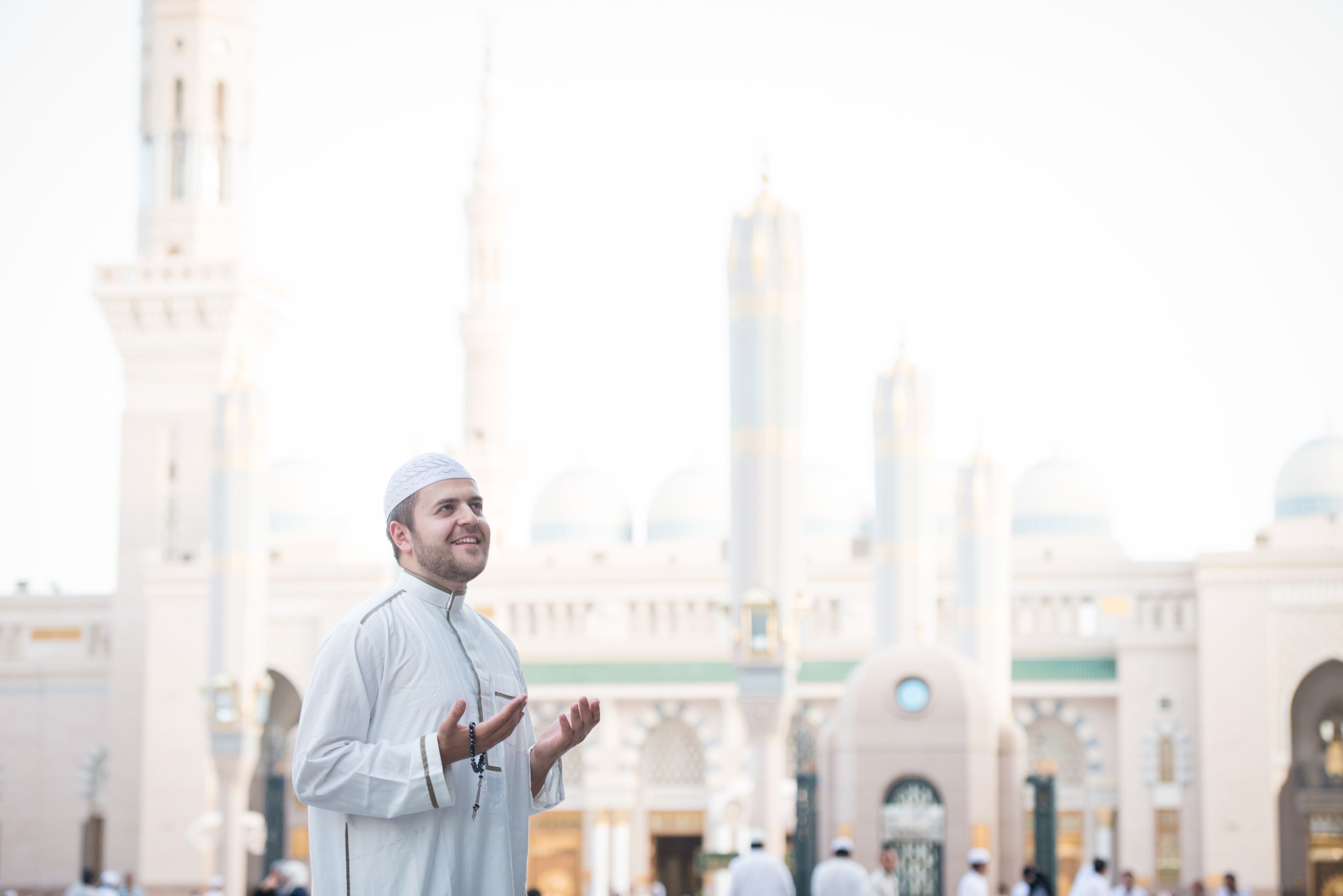 During the first year of Muhammad’s (pbuh) migration, construction was carried out using bricks made from stone and kneaded clay. Palm trunks were used as pillars to support the roof, itself made from palm branches. However, the greater part of the courtyard was left open. It was about 35 meters long, 30 meters wide, and three meters high. It had a Mihrab and three doors. The mosque served as a community center, court and religious school. 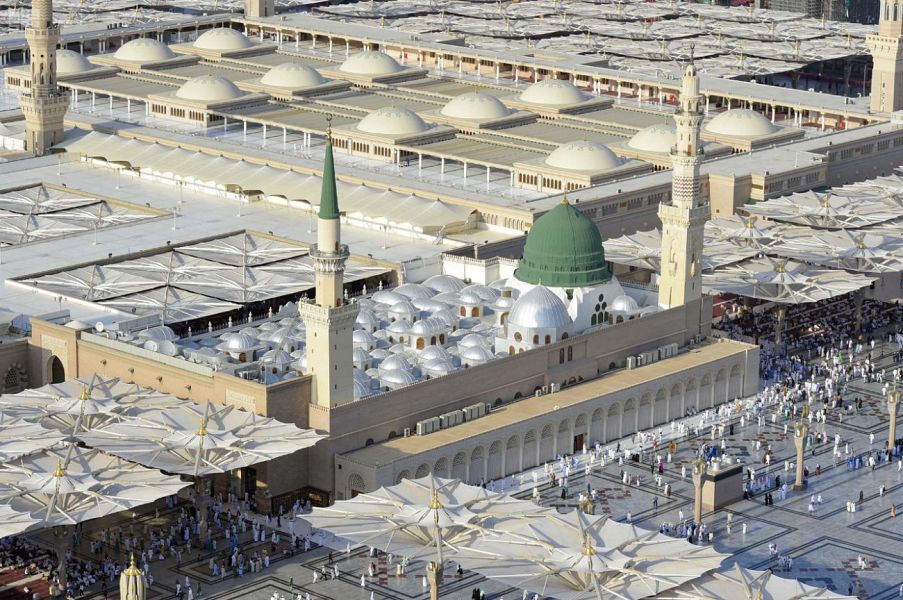 After the Battle of Khaybar, the mosque was extended by almost 50 meters on each side during the Prophet’s (pbuh) era. Subsequent Islamic rulers greatly expanded, restored, and decorated it. In particular the second and third caliphs Omar and Othman extended the mosque to an area of almost 5,100 square meters.

Expansion continued during the Umayyad, Abbasid, and Mamluk eras to increase the number of columns, doors, and domes. Then the Ottomans restored and decorated the mosque. In 1909, it became the first place in the Arabian Peninsula to be provided with electrical lights. 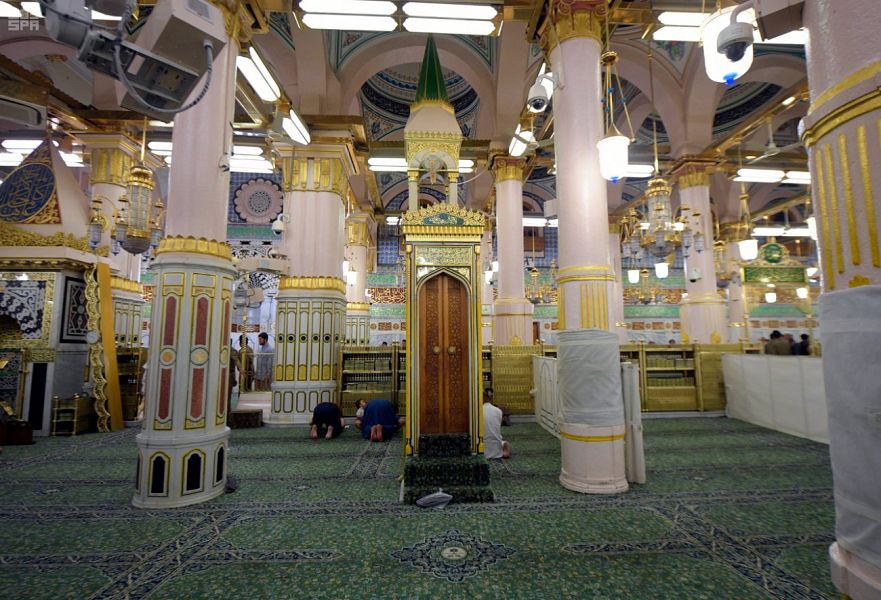 • Minbar (pulpit): The original minbar used by Mohammad was made from palm trunk with a three-stair ladder. Then was replaced by a marble one by Qaitbay in the late 15th century, which is still in use at the mosque. 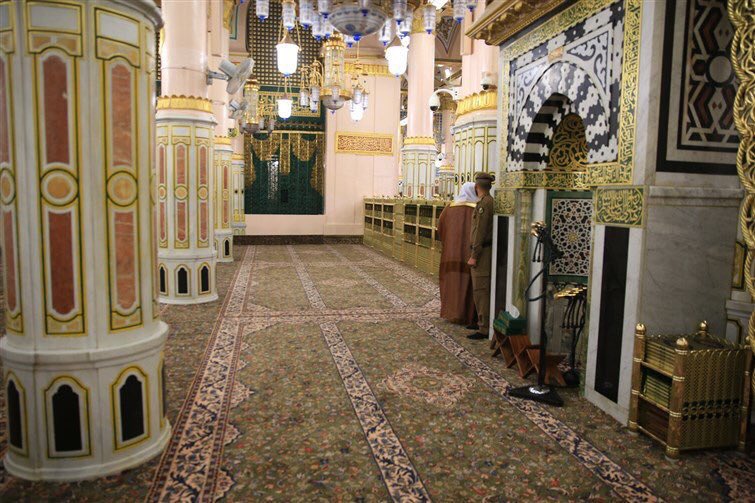 • Rawdah: This is the area between the Prophet’s Chamber and the minbar. It is regarded as one of the Gardens of Paradise. It is presently distinguished by a green carpet and is 22 meters long and 15 meters wide. 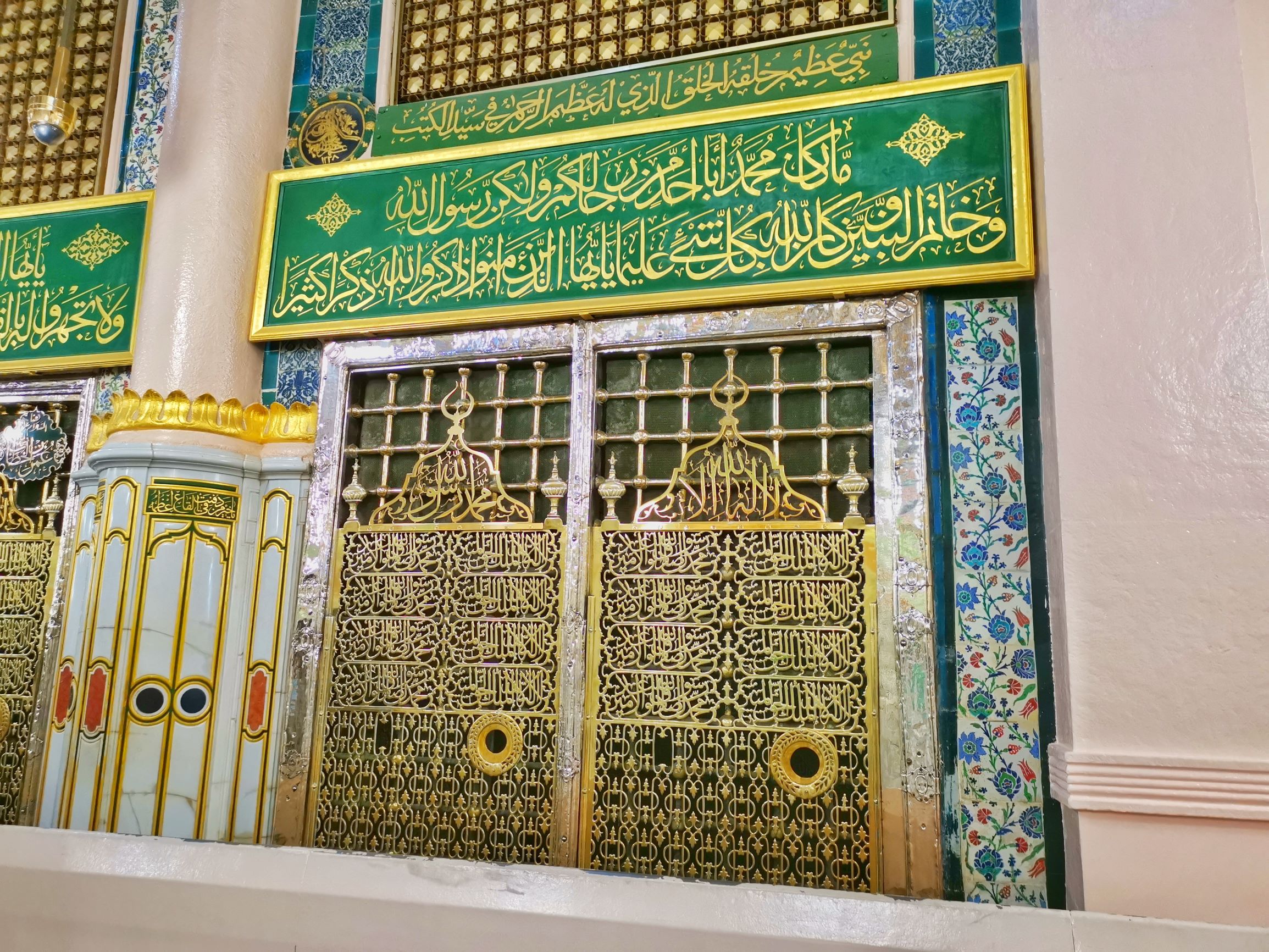 • The Prophet’s Chamber: The golden sacred Chamber in front of Rawdah holds the tombs of Prophet Muhammad and two of his companions, Abu Bakr and Omar bin Al-Khattab. 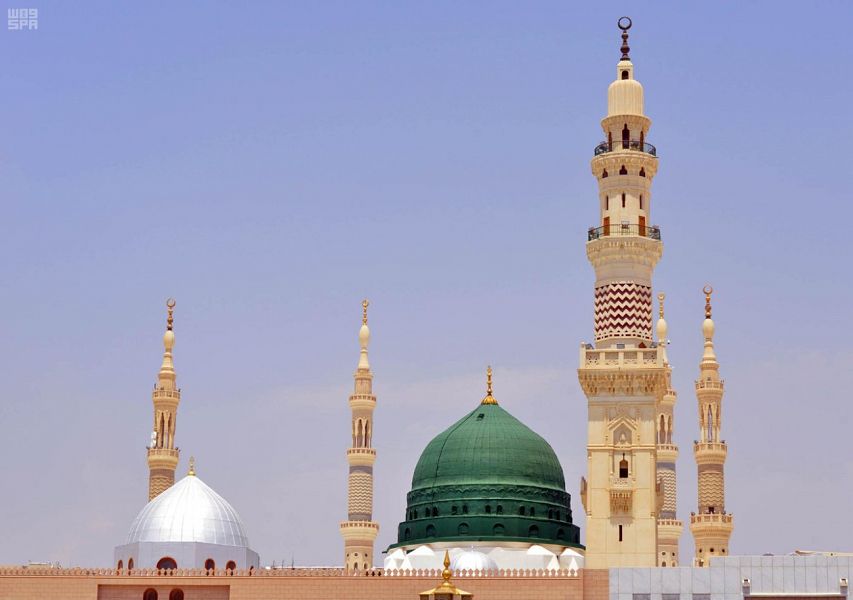 • Green Dome: Formerly called the Blue and White Dome, the dome was painted green during the Ottoman era and covers the Prophet’s Chamber. 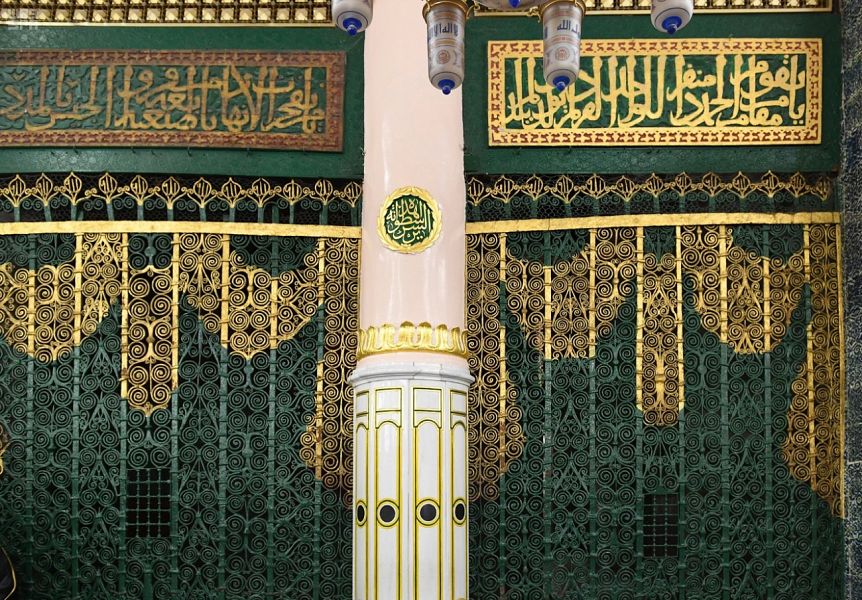 • Qibla Wall: This is the southern wall with beautiful decorations that stretches from Bab Al-Salam to Bab Al-Baqe’ in the direction of the Qibla. 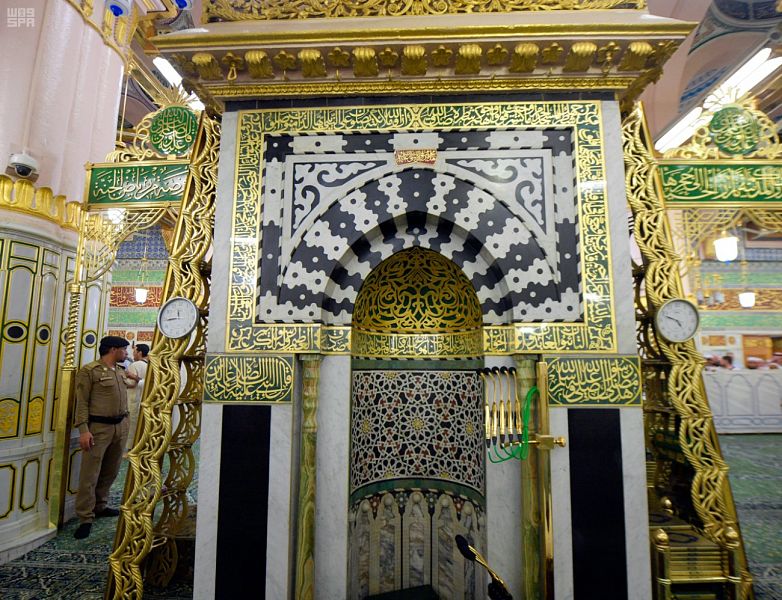 • Mihrab (niche): There are a number of mihrabs built throughout the Islamic ages but only a few are visible to visitors. The most famous is Muhammad’s Mihrab, where the Prophet (pbuh) led prayer when the Qiblah turned towards the Holy Ka’aba. There are other niches that act as indicators for praying, including the Othmani mihrab, Sulaymani mihrab, Fatima mihrab, Tahajjud mihrab, the raised platform for Muhammad’s (pbuh) Ṫahajjud prayer and Al-Omari mihrab, where the Caliph Umar used to lead Muslims. 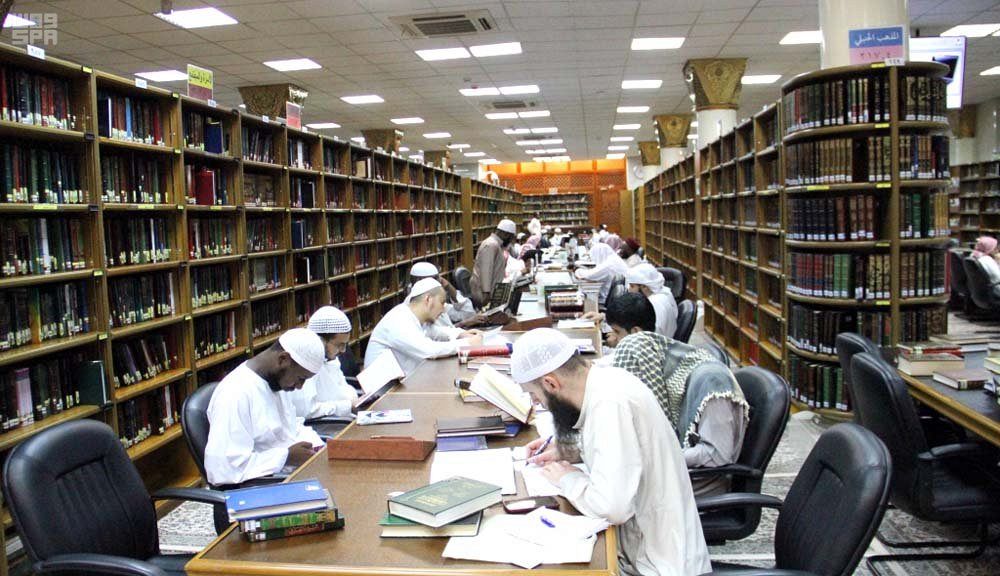 • Library: The mosque has two libraries – the first was established in 886 AH with many heritage manuscripts, while the second is a digital library with a large number of books.