Articles/What did Saudi women wear in the past?

What did Saudi women wear in the past?

Saudi Arabia is known for its diverse geography and culture, making it a distinctive society. The variances in lifestyles across the cities, rural areas and deserts tend to reflect in the local populaces’ clothing. Wafy spoke to Tahani Al-Ajaji, a professor in the history of clothing and embroidery who told us about the different types of clothes women used to wear in the past in each Saudi region. 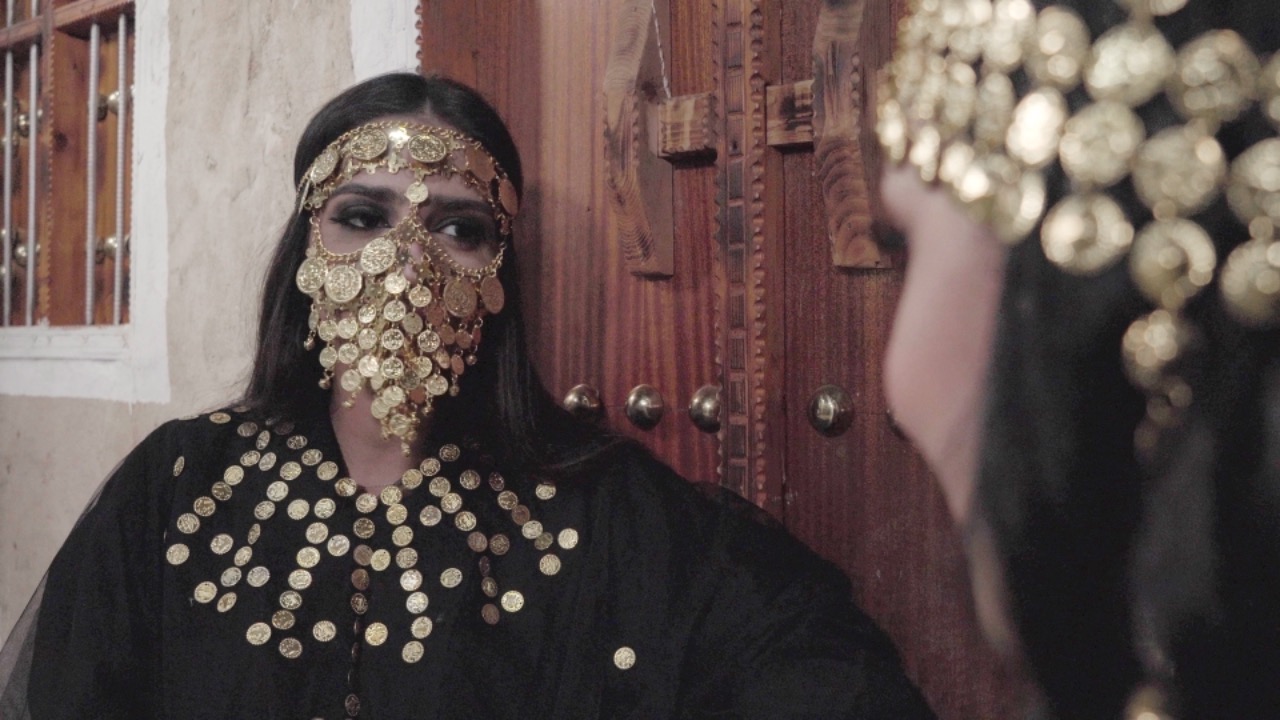 Traditional garments in this region are loose and have common characteristics. The traditional “Dara’a”, also known as “Mugata” is a floor-length garment that covers the woman’s entire body. The name also changes according to the fabric and embroideries. The upper layer is called “Thoub”, which has various names depending on the fabric, stitching and occasion such as “Mnkil”, “Mtafit”, and “Al-Tour”. The “Abaya”, a commonplace garment today, was also used in the past when the head was covered with a scarf known as “Shaila” or “Ghadfa”. Another variation of Mugata is “Karta”, which has a special cut at the waistline. 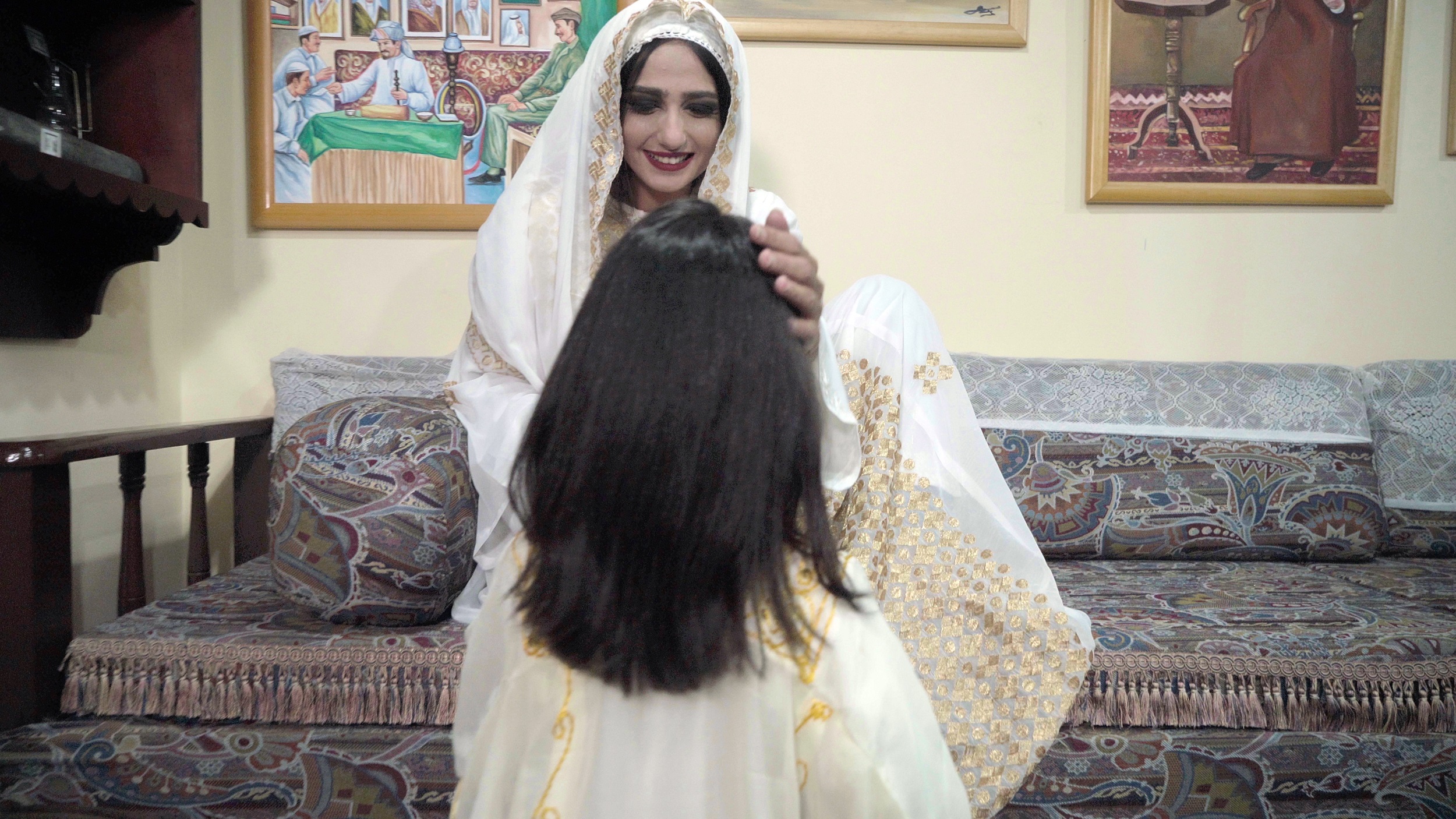 A diverse range of traditional indoor and outdoor dresses can be found in this region. The locals used pilgrims’ clothes as inspiration for their own garments. Among the famous traditional clothes in the region is the “Gumra” dress, which the bride wears a day prior to her wedding.

The head is covered with three layers: “Shamber” (a scarf wrapped around the head), “Mudawara” (a scarf braided with the hair) and “Mahrama” (the third layer that is normally decorated with crochet). The garment itself is called “Zabon” and on top the bride-to-be would wear a square-shape Thoub. 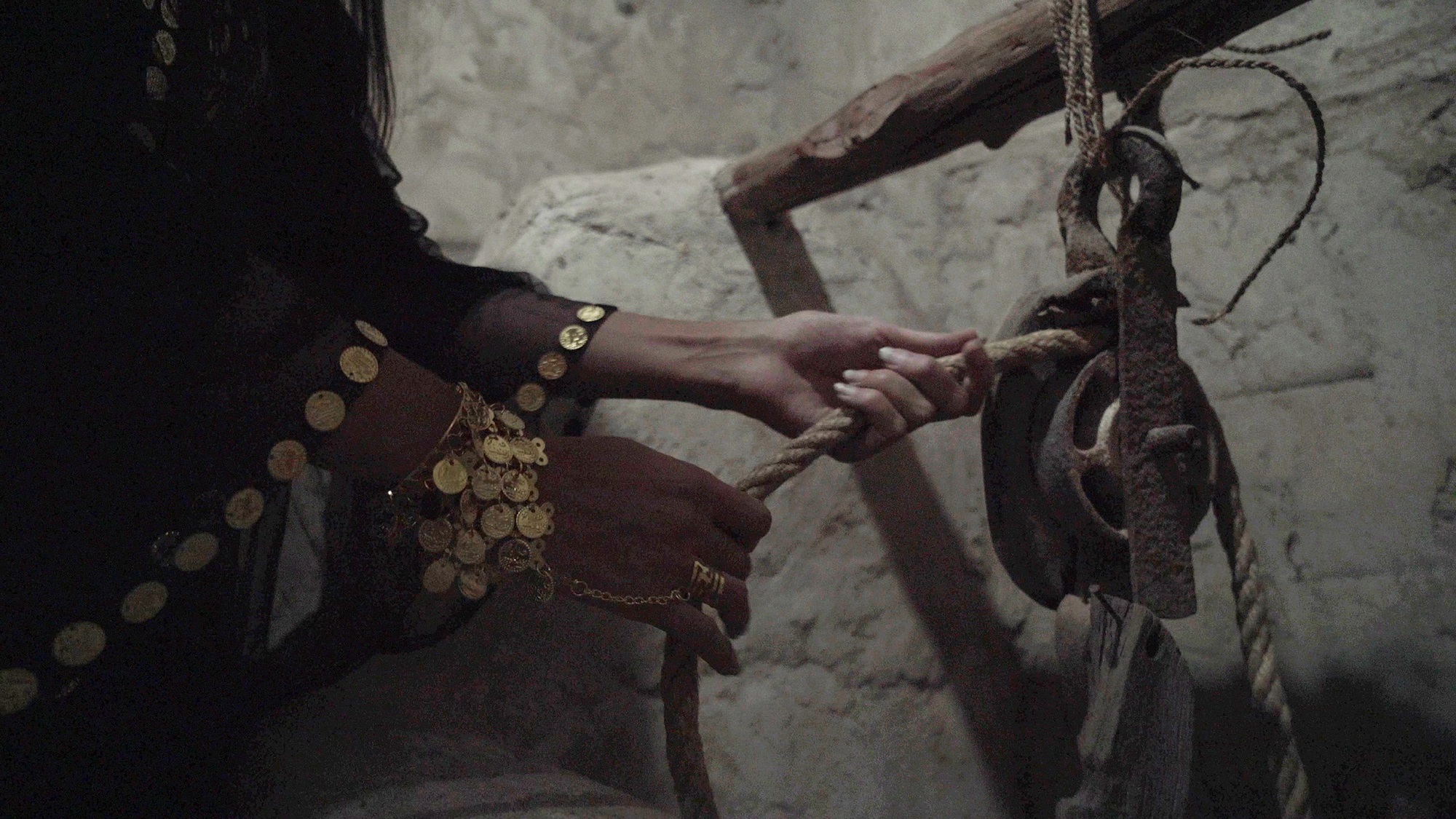 On top of the Thoub the woman places a piece of cloth called “Loga” in which she places the gifts she receives from guests. The bride also places a crown on her head and her hair is decorated with pearls. Different tribes in the western region have their own female traditional gowns that distinguishes them from others.

The main garment is “Dara’a”, a loose garment that has different names depending on the fabric used, embroidery, and place of manufacture. Among the different types of Dara’a which women wear on different occasions are: “Umm Asa”, “Bambawba” and “Mufhaha”. A modern version of the Dara’a is the colorful “Nafnuf”.

On top of Dara’a women tend to wear Thoubs just like in the central region. However, the Thoub size in the Eastern Province is smaller. The name of the Thub varies depending on the fabric, stitching and occasion; among these are “Almusarah”, “Al-Nashl”, “Al-Mufahah”, “Al-Thuraya”, “Al-Nagda” and “Al-Kurar”. The bride wears a green Dara’a known as “Nashil” on top of which she would wear a Thoub. She also puts on a “Sirwal” (pants) and a scarf called “Al-Mshamar”. 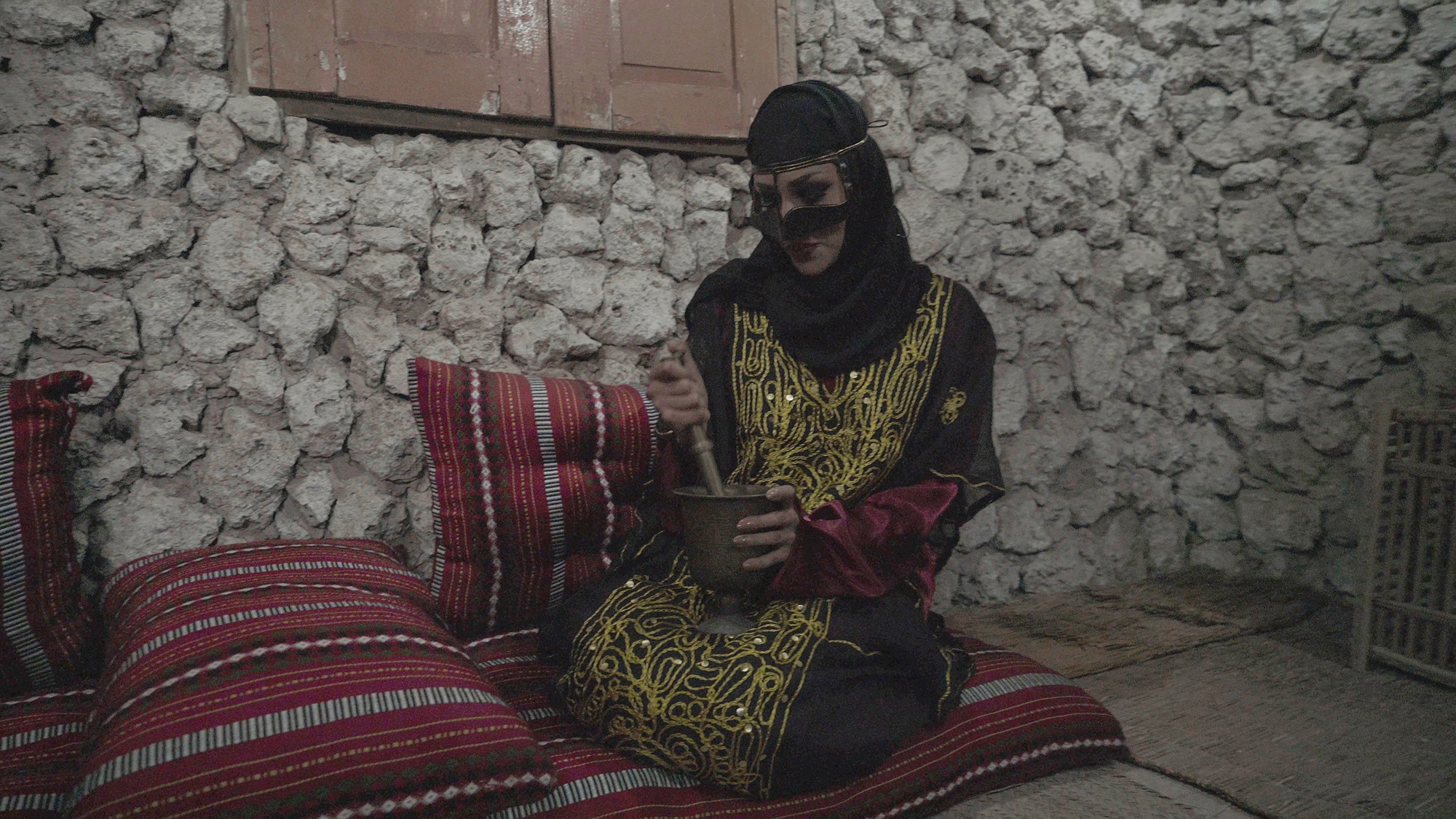 The garments in this region are inspired by both the central region and the neighboring countries. The main dress is “Al-Mhawthal”, a very long dress with a belt worn by Bedouin women outdoors. The belt is called “Al-Shwaihi” or “Al-Safifa”. A second important dress is “Al-Sharsh”, also known as “Al-Midrgah”, which is a black dress. Women in urban areas also worn different dresses including “Al-Zabun”, “Al-Migata”, “Mifira”, “Kartaj” and “Murawden”. All of these dresses are different variations of the traditional garments imported from different regions in the Arabian Peninsula and nearby countries. 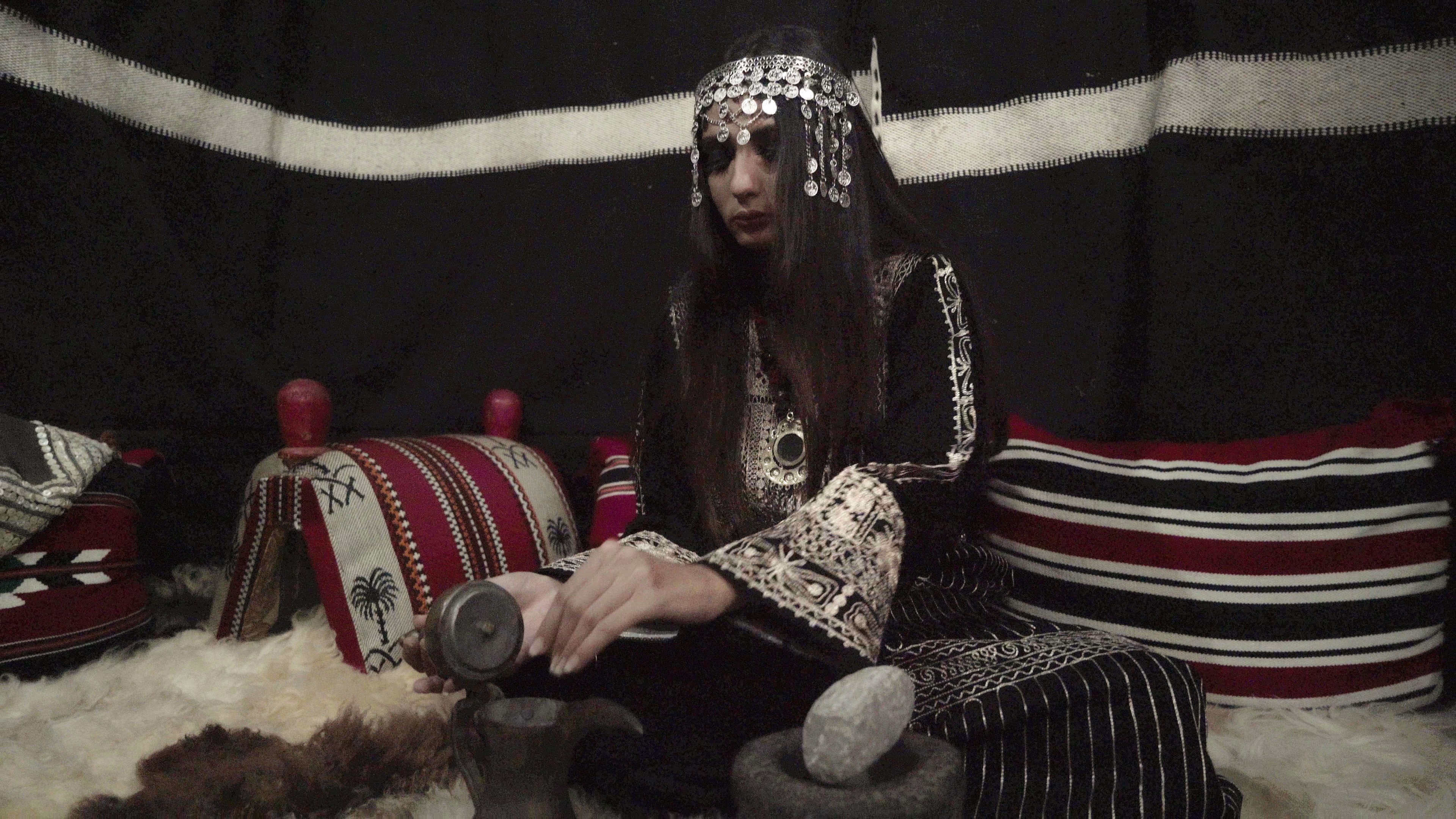 Women in this region wear “Mujanab”; the name describes a dress that has different side sections. Among the costumes are Thoubs known locally as “Al-Muwarak” and “Al-Mubgl”. The young girls cover their head with a triangular scarf known as “Mandil” secured with a headband known as “Isaba”. Women cover their head with decorated scarves on different occasions and they can place silver accessories on their foreheads. 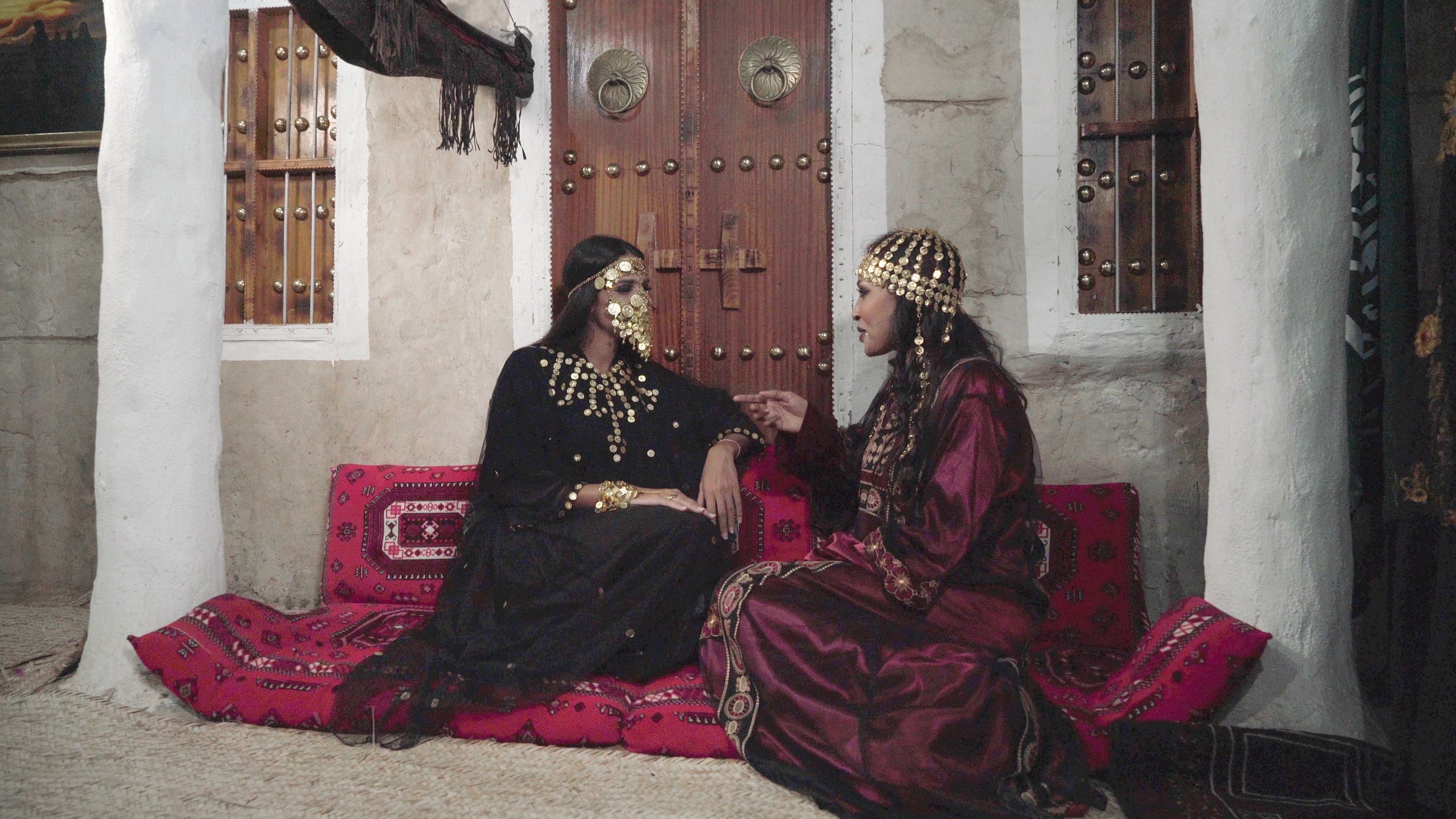 Women who work in the fields tend to cover their heads with Mandil and over which they place giant hats known has “Tafsha” or “Hatfa”. The hot weather often drives women to wear light fabrics – normally a shirt and a “Fouta”, a piece of cloth wrapped up on the lower part of the body to form a skirt. They also protect themselves from the sun with a scarf and a hat.