In Tabuk province’s Tayma region lies a unique rock considered one of the Arabian Peninsula’s natural wonders because it has been split perfectly into two. Nasla rock, located about 250 kilometers from Tabuk city, is a separate part of the nearby eponymous mountain and considered a component of the peninsula’s cultural heritage and history.

How the huge rock split into two has raised a lot of questions. A geological explanation is that its farthest sides slightly shifted millions of years ago, leading to this clean divide without either of the two halves falling.

Further evidence of this occurrence is that there are no inscriptions that encompass both parts of the rock; instead, each side has its own rock art. 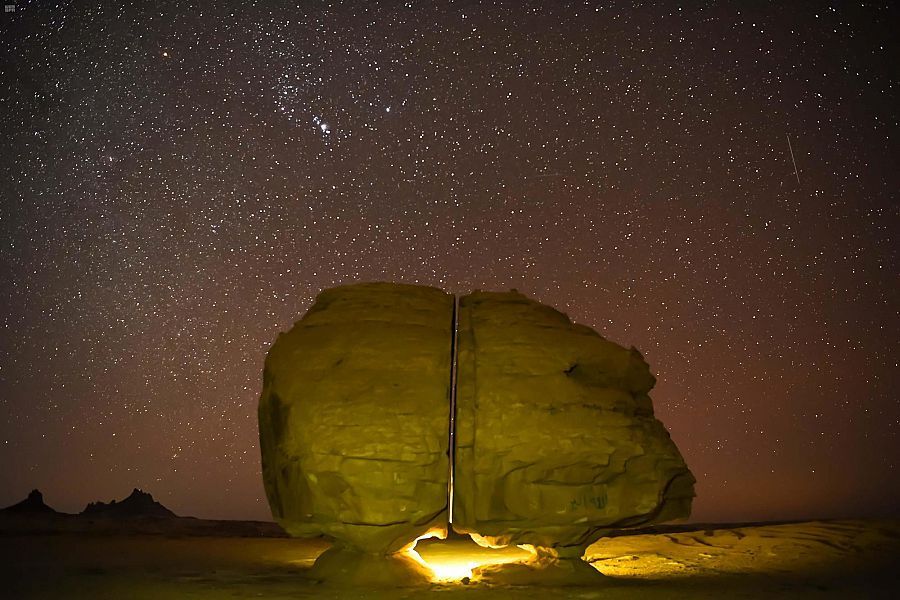 The rock is approximately eight meters long and sits on two rocky bases – the left one smaller than the right. The age of this landmark, which consists of thick layers of sand stone, is more than 400 million years.

The rock features ancient Thamudic drawings and inscriptions of animals and landscapes dating back nearly 3,000 years, conveying the lifestyle of the area’s ancient inhabitants. These inscriptions were used as signs for caravans and passerby, but now are part of one of the most beautiful tourist attractions in Saudi Arabia.